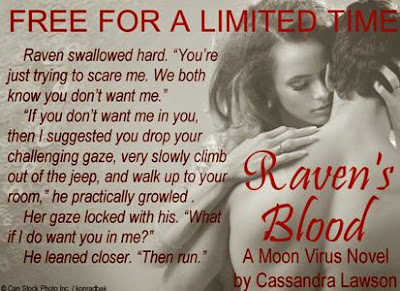 Synopsis
Following the death of her wood nymph mother at the hands of vampires, Raven worked hard to build a life for herself in one of the few remaining human settlements. Her life takes a frightening turn when she finds herself an unwilling guest in a vampire settlement, but things are not anything like she expected them to be. Still, she cannot help but feel that her attraction to the vampire leader is a betrayal to her mother’s memory and her human friends.
From the moment Connor first laid eyes on Raven she has thrown his entire world off-balance. In order to prove his strength as a leader, he has no choice but to take her up on her offer to trade her freedom for that of her human friends. Having begun his life as a slave, he has no interest in keeping the wood nymph captive. As a man, he has no desire to feel this overwhelming attraction to a woman who hates him and his kind.
As Raven spends more time with the vampires, her feelings for Connor grow even stronger and Connor finds that she may be the one thing he cannot live without. Unfortunately, a new danger emerges that could threaten the survival of vampires and humans alike. As Connor struggles to unravel the mystery of the attacks from a new species of vampire, a madman will go to any lengths to get Raven’s blood.