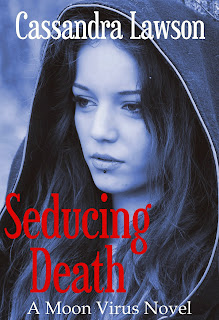 In the decade following the brutal murder of his wife and daughter, Ian has existed in a world built on grief and hatred. Just when Ian has finally begun to claw his way through the shadows of his past, a knife to the heart ends it all . . . or is it the beginning? After waking up in a strange home, Ian’s only companion is the woman who saved him. Undeniably drawn to her, Ian finds himself wondering if it really is possible to love again.
Trapped in a world where she is little more than a pawn for the Fae, Kyleigh long ago accepted the reality of her existence. She is no one’s savior and no one’s guardian angel; she is death. That is until she breaks all the rules to save a vampire many believe beyond salvation. Ian sparks a passion she never believed possible and reawakens emotions she thought long buried.
While secluded in a realm between life and death, Ian and Kyleigh are free to explore their feelings for each other. When enemies, past and present, join forces to destroy those Ian loves, they are forced to leave the safety of Kyleigh’s realm. Can their fragile bond survive when they are faced with the demons of Ian’s past? 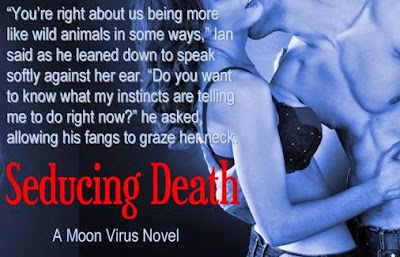 Kyleigh stopped listening to their conversation as the cold breeze of the shadows grew nearer. Time was almost up, and she still didn’t have a plan to save Ian’s life. The smart thing to do was to walk away knowing she’d done her best, but she’d watched Ian too long. No, she would not give up when Ian’s soul was so close to redemption.
“Maybe we should head back in. I’ll message Connor and see what he thinks,” Ian’s friend said, but it was too late. Both vampires heard the danger approaching. His friend pulled out the handheld crossbow and a knife while Ian drew two knives.
“Well, isn’t this a stroke of luck,” called out a human as he emerged from the woods followed by six others.
“Are you having some trouble, human?” Ian asked casually. His hands had dropped to his sides, but he still held the knives. This came as no surprise. She’d seen him in action enough to know this vampire rarely let his guard down.
“I think you already have,” the human said.
“I haven’t wanted any woman since Kate was killed,” he said, leaning forward to rest his elbows on his knees.
Kyleigh saw the inner struggle in both vampires. They obviously suspected the humans were up to no good, but both were too noble to kill them without provocation. That was new for Ian. No longer shrouded in darkness, Ian wouldn’t kill unless he had to.
Several other vampires stepped out of the trees, surrounding Ian and his friend. Kyleigh was all too familiar with this type of vampire. These creatures kept her busy many days. Quickly scanning the group, she found that all the innocent souls had been freed. With this newer virus they were sometimes trapped in the undead body, which was a form of torture she wouldn’t wish on the most evil person. She had yet to figure out how that was even possible, or why one of her kind wasn’t summoned to free the poor soul.
Ian and his friend reacted immediately. The knives in Ian’s hands found their marks in the hearts of two vampires, and Ian’s friend shot the crossbow at another vampire. Kyleigh watched the battle before her with a sense of helplessness. They were too outnumbered and there was no way to win. Even now, the shadows moved in, hungry for death and sin. Rubbing her arms against the cold breeze that preceded the shadows, she watched in horror as Ian was surrounded.
A scream no one would hear escaped her lips when the knife sliced through Ian’s chest. He collapsed to the ground, blood soaking the leaves. Her form wavered in and out with her rage. Despair began to settle around her, but she refused to let it control her. Ian was too close to being saved to lose him now. Whatever it took, the shadows would not claim his soul.
“Take the blond alive!” shouted one of the humans, obviously referring to Ian’s friend. “Damaged is fine, but he has to survive with no damage to his face!”
Determination flashed in Ian’s eyes, and his soul brightened as he worked hard to conceal his phone while sending a message. Then he buried the phone. Soon the blond vampire was unconscious, and Ian was struggling for life.
“Should we finish off the other one?” asked one of the humans. “Looks like he’s still alive.”
Kyleigh held her breath, praying to a god who’d long ago abandoned her that they would just leave.
The leader laughed. “Looks like he’s in a lot of pain,” he said with a vicious sneer.
The urge to use violence against the human who obviously enjoyed the pain of others came as a surprise to Kyleigh. It was a relief when they left the area so she could make her way toward Ian. His weakened state meant she had only seconds to save his life. Her decision made, she emerged from the trees, becoming visible to Ian.
Ian’s beautiful green eyes opened and focused on her as she approached him.
“Kate.” His voice was barely a whisper.
“Don’t worry,” she said in a soft reassuring voice, trying to hide her fear as the shadows closed in around them. “You’re going to be okay, but we need to get you out of here.”
Wrapping them in her power, she bound Ian’s soul to his body. Thankfully he picked that moment to lose consciousness, so she didn’t have to explain what was about to happen. 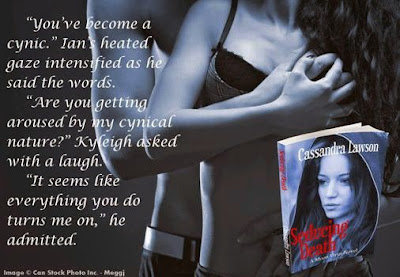 a Rafflecopter giveaway
Posted by Author Cassandra Lawson at 12:00 AM