A Tarnished Strength Pre-Order and Excerpt 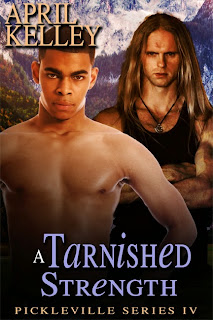 Violence has always solved most of his problems, but it can’t help him win over a man whose whole life is surrounded by things that scare him.
Brad Flynn had a rough start to life. With an abusive father and an addiction problem, his life hasn’t been easy. He has always been the resident bad ass and the town drunk. Even when he gets sober and becomes an upstanding member of the community it doesn’t seem to change the towns mind about him. If it weren’t for his two brothers he would have no one.
His past doesn’t make having a love life easy either, but when he meets Kendrick Ashby, the local bar own, he wants to give it a try. The only problem is Kendrick has his own problems, ones that make having a violent boyfriend impossible. Both have to decide if dating is even worth a try.

Kendrick didn’t even bother to knock on the door. He just walked into the house like he owned the place. Caden looked up at him from his seat on the couch with raised eyebrows, but didn’t say a word about him barging into a house that wasn’t his. It was almost as if Caden expected him just to walk in, which was weird.
“Oh good, you’re here. I have some ribs I need you to show me how to cook,” Caden said.
“Okay. But where’s your brother?”
“Luis isn’t home from work yet.” Caden grinned at him.
Kendrick glared. “Smartass. I meant you’re older brother.”
“Luis is my older brother.”
“Caden.” Kendrick took a step closer to him.
Caden chuckled with delight. “God, you’re so touchy. It’s going to be fun having you around.”
“Don’t forget. You need my help with those ribs.”
“Fine. He’s in the shower.”
Kendrick walked down the hall and knocked on the bathroom door when he came to it.
“Come in. Again. You pee more than anyone I know, boy.”
Kendrick sat on the closed toilet seat and gathered up his courage to speak. The fact that Brad was okay was a relief. For some insane reason Kendrick couldn’t understand, he really thought Brad was going to hurt himself. Beyond sounding annoyed with Caden—who could blame Brad—he was unharmed. Kendrick sighed and silently thanked God for that fact.
“I don’t like being hung up on,” He finally said, because that was annoying. If this relationship was going to work then he really needed to be more assertive.
Something crashed down on the tub floor. It sounded like a shampoo or conditioner bottle. “Ouch. Shit.” Brad said.
“Are you okay?”
“Fine. What are you doing here?” Brad said, sounding even more irritated and surly.
“I wanted to make sure you’re okay.”
“I’m just fine. Can I have a shower by myself now?”
Okay that was it. Kendrick had enough with the attitude. Kendrick quickly stripped off his clothes and pulled back the shower curtain. He stepped in behind Brad. Brad whipped around when Kendrick entered. “No. You can’t.”
“Jesus Christ, Kendrick.”

Living in Southwest Michigan, April lives with her husband and two kids. She has been an avid reader for several years. Writing her first story at the age of ten, the characters in her head still won't stop telling their stories. If April isn't reading or writing she can be found outside playing with the animals or taking a long walk in the woods.

Title: The Sum of Everything
Series: Pickleville Book 2
ASIN: B00V2NSCW2