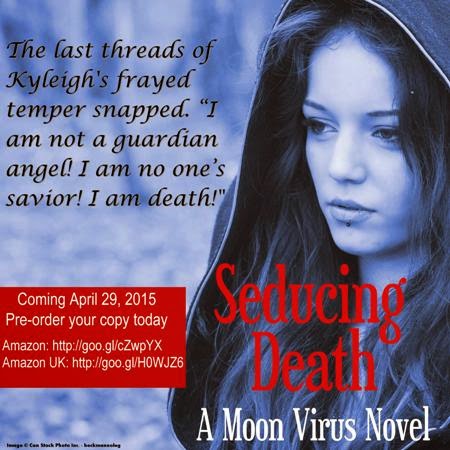 Pre-Order Seducing Death
Amazon.com    Amazon UK    Amazon CA   Amazon AU
Synopsis
In the decade following the brutal murder of his wife and daughter, Ian has existed in a world built on grief and hatred. Just when Ian has finally begun to claw his way through the shadows of his past, a knife to the heart ends it all . . . . or is it the beginning? After waking up in a strange home, Ian’s only companion is the woman who saved him. Undeniably drawn to her, Ian finds himself wondering if it really is possible to love again.
Trapped in a world where she is little more than a pawn for the Fae, Kyleigh long ago accepted the reality of her existence. She is no one’s savior and no one’s guardian angel; she is death. That is until she breaks all the rules to save a vampire many believe beyond salvation. Ian sparks a passion she never believed possible and reawakens emotions she thought long buried.
While secluded in a realm between life and death, Ian and Kyleigh are free to explore their feelings for each other. When enemies past and present join forces to destroy those Ian loves they are forced to leave the safety of Kyleigh’s realm. Can their fragile bond survive when they are faced with the demons of Ian’s past?
Posted by Author Cassandra Lawson at 7:35 AM